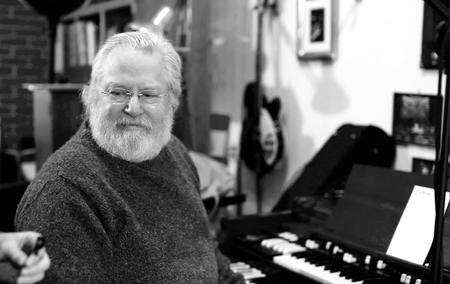 Moose Smith has lived in the Nashville area since 1985 but he's still a Tar Heel at heart as much of who he is was formed in North Carolina. His music career started in the third grade on the piano and by the eighth grade had his first band playing for dances around his hometown of Graham. During high school, he began working regionally with The Weejuns.
His first two years of college was in Boone, NC at Appalachian State when he joined The Inmen Ltd., a band featuring Carolina Beach Music. After two years of commuting to "get to the van to go to work", he transferred to Elon College where most of the group were located. Moose wrote the four sides the group recorded during the 60s, including internationally regarded tune "Little Girl".
For the six years Moose was with The Inmen Ltd (later known as Peace Core), the group played with and/or backed up many of the well-known R&B and Rock icons of the day. These groups included The Four Tops, The Temptations, Marvin Gaye, The Tams, The Four Seasons, Steppenwulf, Three Dog Night, and The Allman Brothers Band. When The Inmen began to work six-day weeks and after Moose married his college sweetheart, he dropped out of Elon with eleven credit hours to finish his coursework.  In 1972, Moose left the group in order to finish his BA degree in History. At this time, he focussed also on his songwriting and arranging skills.
At the end of 1973, Moose and his growing family moved up to the Tidewater Virginia area to become the Music Director for the 700 Club television program for five years. After this stint, his family (now including three children) moved to Tulsa where he was the orchestral director for an area church along with more arranging, session work, producing, and recording the first of five of his own albums in the Contemporary Christian genre. During the four and a half year period, the premiere of his opera "Can You Tell Me the Zip of that Faraway Land?", based on the parable of the Prodigal Son found in the New Testament book of Luke, was staged. The Moose Smith Band made the rounds at summer festivals and college concerts.
A move to the Atlanta area came after Moose and his wife Sue began Earthsalt Productions, an umbrella organization that included all of his studio, publishing, theatrical, and performing ventures. In 1982, an album produced by Moose became a finalist for the Dove Award in the Inspirational category.
After twenty five years of doing music in a steady fashion, a call came from the headmaster of a Nashville area private school looking for someone to head up its music department. The move to Franklin,TN began a thirty year stretch that included four years of private school, obtaining an MEd degree from Belmont College, and twenty five years in the public school sector.
Now recently retired from education, Moose has begun working periodically with The Inmen Ltd who were inducted into the Carolina Beach Music Hall of Fame in 2007. Also, oldest son Geoff has followed into the "business" as a player and writer, daughter Susannah is a company member of Studio Tenn (highly regarded theatrical group based in Middle Tennessee), youngest Isaac is a self taught keyboardist. In 2017, after having spent 30 years teaching her students the wonderment of the written word, Sue passed away. Her legacy is seen in the lives of those who were privileged to have studied with her.