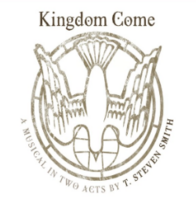 WHERE TO FIND ONLINE

Cast recording of Moose's New Musical, featuring the top session musicians and singers from the US.

Here is a synopsis of what the show is all about:

What if the beginnings of the Church had transpired in 1950s Southern US? My intention for Kingdom Come was to consider this thought, re-staging the Book of Acts from the Bible into a musical featuring bluegrass and southern rock music. I have tried to be faithful to the text in relating a time where "Jesus of Valdosta" has risen from the dead and instructs His closest members of the Movement to wait in Atlanta for the promised Gift that will kickstart the spreading of the Church.


Act I
Dr. Lucas is writing a letter to his friend Theo about some of the occurrences after Jesus of Valdosta left the Earth to rejoin His Father in Heaven.

The closest friends of Jesus are there in Atlanta after He left the Earth (Risin' Up for the Occasion).

The Gift of the Holy Spirit is given to them (Fire in the Attic), and they become the talk of the town and the scorn of the city officials (The Thunderbird Song).

Rocky (Peter) addresses the crowd concerning their lack of understanding of who Jesus is (Turn Around and See).

The numbers of converts grow (Unity in the Community). Rocky and Johnny run into a man who has been lame all his life and, through the power of Jesus, heals the condition (Pickin' Em Up, Layin' Em Down).

The Mayor, whose hero is the infamous Senator Joe McCarthy, hears of this and begins worrying about the problems the new Movement is posing with the national government charging him to clean up the problem (What a Mess).

Rocky and Johnny are brought before the City Council and reprimanded. Rocky responds (You Can Make Up Your Mind) with the Council beginning to make threats (These Boys're Gonna Git It).

Although the Movement has made strides in growth, problems arise. The system of supporting one another by sharing is, by and large, a good one. But one couple (Harry and Sapphira) lies about their participation in the system (Fakin' It In the Plate). To be seen as 'pillars of the community,' they claim to give all their possessions, but that act was all for show. They fall dead as a consequence.

There comes up a member of the Movement named Steve. He challenges the Council to the point they are angered (Like the Rose, So It Goes). The Council then decides to kill Steve with baseball bats over the issue (Like the Rose/This Boy's Gonna Git It).

Saul makes his entrance as one Councilman who is overly willing to help rid the region of this new scourge. Many members of the group begin fleeing Atlanta.

Matt and Tom find their way to Florida. They are surprised to meet a group of Black sharecroppers who are worshipping in their camp as new members of the Movement (He's Alive and Living In My Heart).

The City Council and Ministerial Association are discussing the further rise of the Movement. One councilman rises to address the others, saying he thinks it will all blow over (Doomed From the Start), but he adds, if it has God's blessing, nothing on Earth could stop it.

Phil meets up with someone on the outskirts of Atlanta who is having trouble discerning the meaning of a section of a Bible he has in his possession. Phil helps the man understand the text as describing the Saving Grace of Jesus of Valdosta. At that point, Phil baptizes the man.

Saul has now ramped up his campaign against the growing Movement with life-changing results (Ridin' Down the Road to Chattanooga). Temporarily blinded, he recovers at the home of Harry, who leads Saul/Paul further into faith in Jesus. The Council gets word of this and is infuriated (This Boy's Gonna Git It). Paul makes his way back to Atlanta.

Although being persecuted by the officials, the Movement still becomes tight in its faith (Unity In the Community).

In Brunswick, a dear woman in that group named Doris has died, and her death affects many who knew her. Rocky comes and prays over her. Doris is brought back to life and then confesses her love of who Jesus is (He Touched My Weary Heart).

At this point, an angel confronts a soldier named Cornelius, instructing him to find Rocky.

While staying in Brunswick, Rocky has a dream/vision that teaches him the importance of seeing all people as equal in the sight of God. Cornelius finds Rocky, who then shares his dream with the soldier and others in the Community (Here We Are).

The Atlanta Council jails Rocky. Mary and her home group are praying hard for Rocky's protection. Having been let out of prison with the help of an angel or two, Rocky shows up at Mary's house and explains the situation.

In Vicksburg, Paul and Barney are preaching the message of the Movement. At first, they are welcomed but then shown an antagonistic attitude. Paul and Barney are escorted to the City limits where the two sternly warn the group against their pride (The Proud Are Gonna Fall).

Paul later is traveling through the Midwest, with two from the Movement named Silas and Timothy. After being given a place to stay by a fashion designer named Lillian, also a member of the Movement, they head to Chicago for a series of prayer meetings. In downtown Chicago, they meet a prostitute who is plying her trade. She is quite disrespectful of the trio when she recognizes them as the "religious nuts" who have moved into the City. Paul acknowledges what is going on with her and sharply prays for her freedom. Her pimp rushes onto the scene and sees that Paul has come to the woman's aid. The pimp calls the policeman on the block and asks him to intervene. The policeman only will get involved when he sees that they have been guilty of "preaching on the street." Off the three go to jail. The now freed prostitute tells of her new life (He Touched My Weary Heart).

Dr. Lucas is finishing his writing by saying that there's not enough paper in the world to write about everything that has transpired. But he says all of the actions were related to one central issue. Paul, Rocky, Doris, ex-Prostitute, and the other witnesses speak of the death of Jesus and the meaning of His Sacrifice when the Council "hung him high" (Nothing More Than This/Here We Are).

Produced and Mixed by Geoff Smith
Mastered by Randy Gardner
All Songs Written by T. Steven Smith © 2019 Call Of The Moose Publishing